Canvas is a heartwarming tale about reclaiming your passion in times of grief. Director Frank E. Abney III is here to talk about the road from crowdsourcing to eventually landing a streaming deal with Netflix and how RenderMan helped achieve such a beautiful look using a remote-work pipeline with a group of talented international artists.

What were your inspirations for the film?

My inspirations for the film were 3-part. The spark came along many years ago when I was having a pretty rough time in the industry, questioning my place in it, and wondering how I would be able to get where I wanted to be. I was around my family quite a bit around that time, including my young niece. Seeing how she navigated the world around her, and thinking about how kids move pretty care-free, it was inspiring. It allowed me to break down some of the things I was holding on my shoulders, and get back to the core of what I wanted to do ... CREATE!

In wanting to create, I knew it had to be something personal, so I instantly connected to the loss of my father, which is something that’s affected me since I was a kid and still hits me even now. Seeing how my mother dealt with that loss, started to form a story for me, especially how I felt she may have lost a bit of herself after his passing. My grandfather was also a source of inspiration. Growing up, I remembered him being pretty quiet and a bit closed off. I often wondered about the backstory there, and just his life in general. 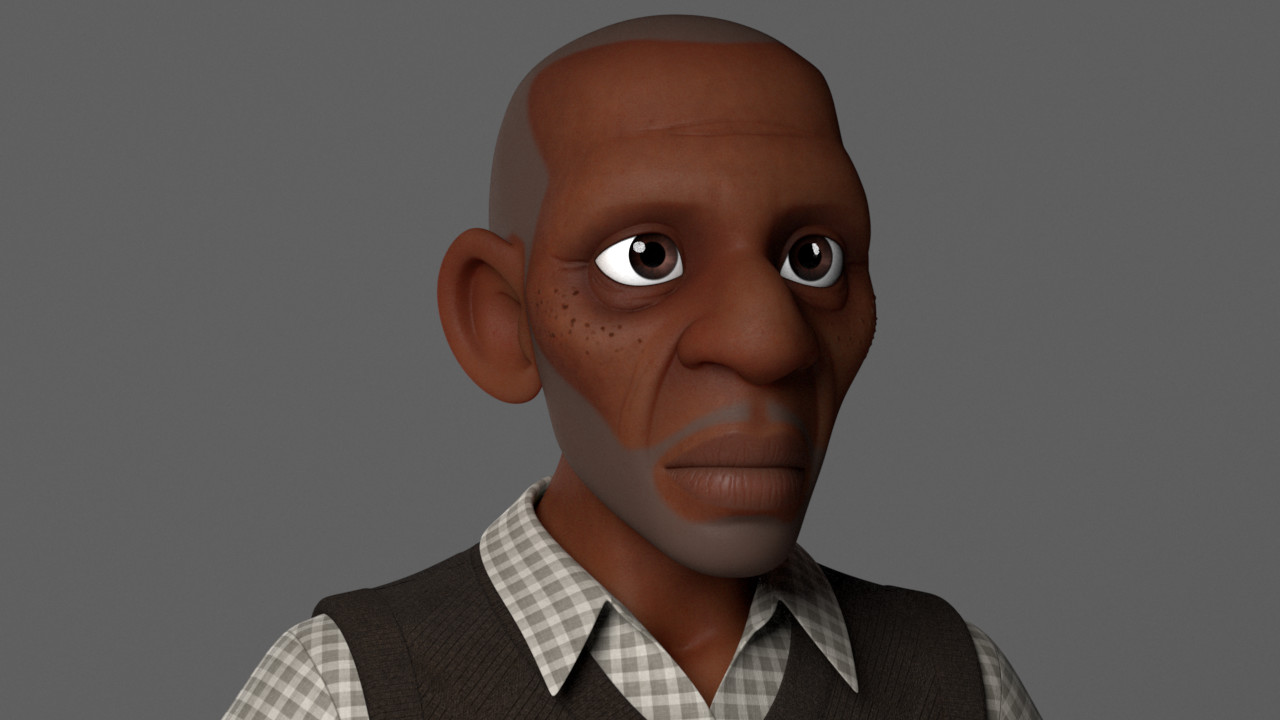 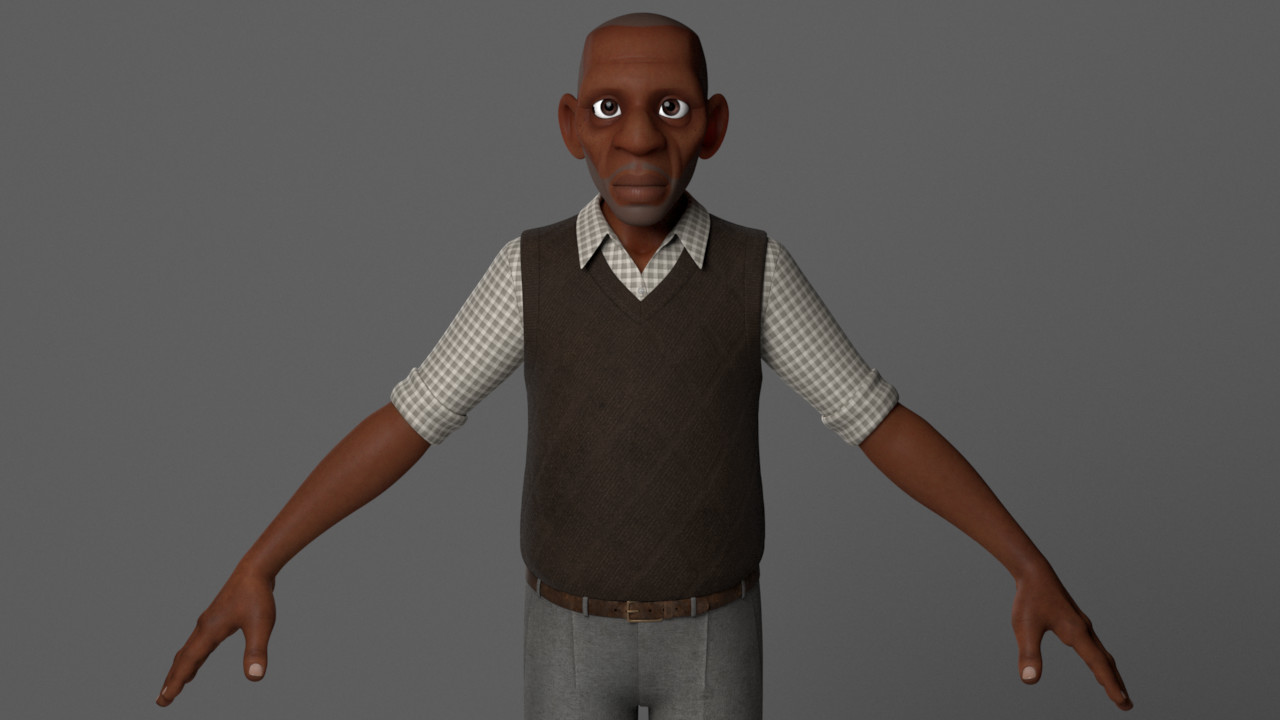 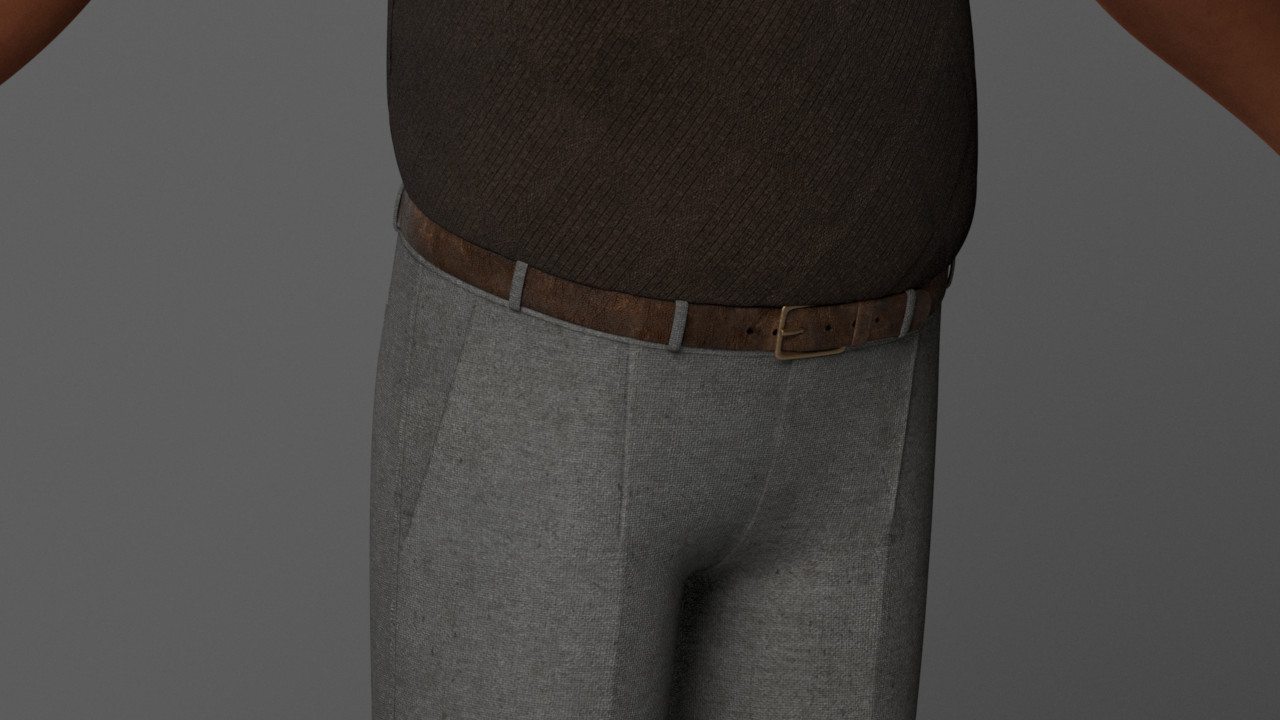 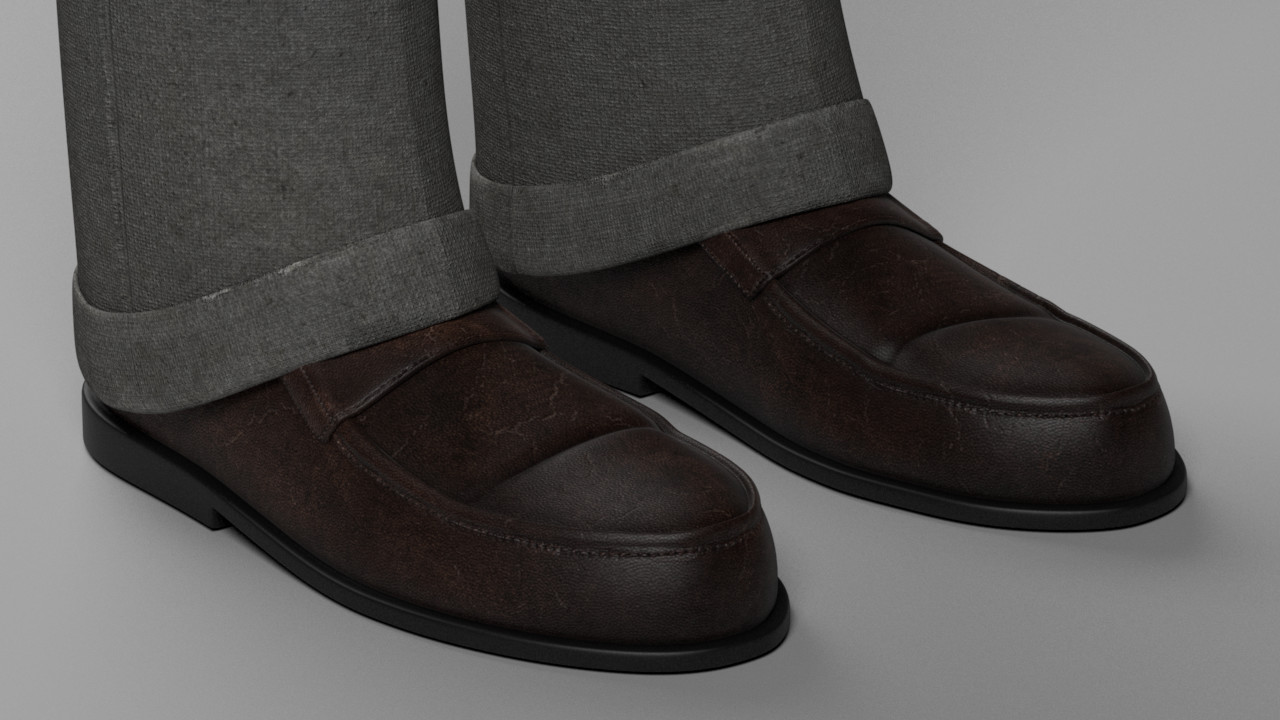 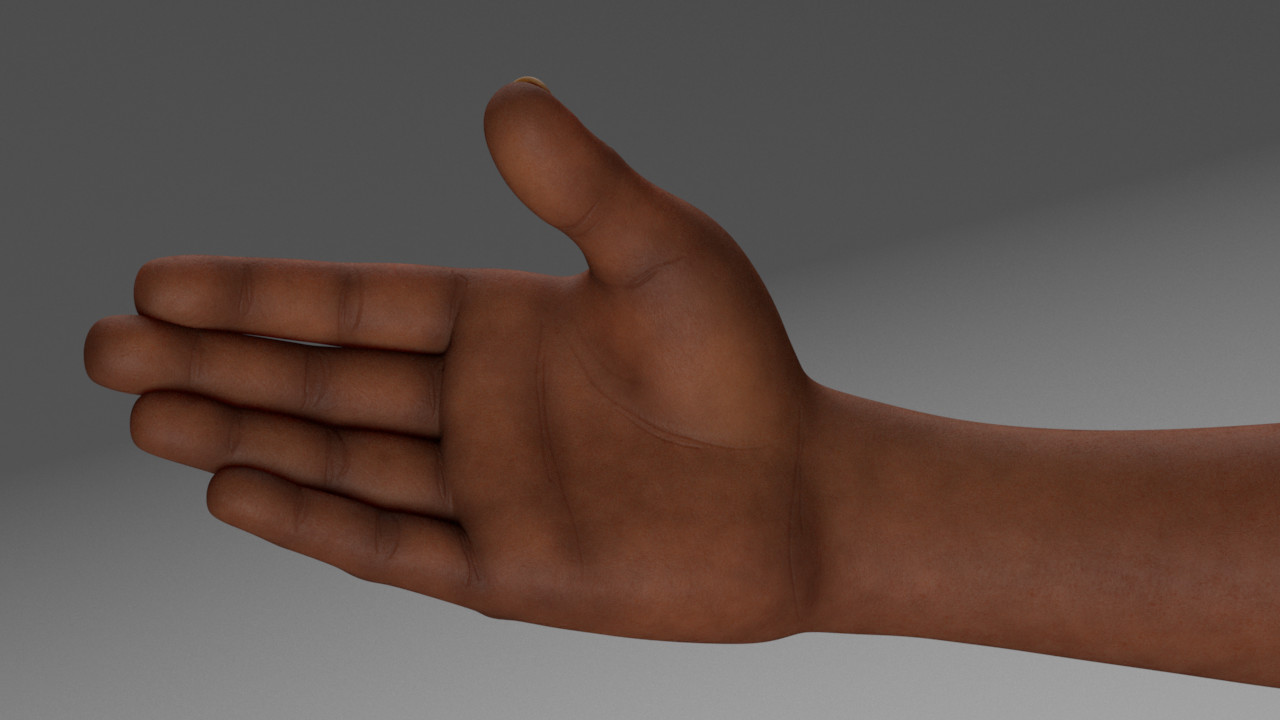 What were your aesthetic references or influences?

I pulled a lot from both animation and Live Action, but I feel like I leaned more on the live action side of things. Films like Selma, Moonlight, and cinematographers like Bradford Young and Morgan Cooper had such a beautiful approach to lighting, and lighting skin specifically. I wanted to capture that subtlety with Canvas.

The camera work was also a very important aspect of the film and we actually were able to get Morgan in as a consultant to look at the short and give us some feedback on what we could do to boost that area of the film.

Were there any challenges in shading and rendering?

I think the big challenge early on was rendering the hair. Sometimes the hair wouldn’t show up, and we didn’t know why. It turns out it was a problem with our mixed OS pipeline and directory mapping. Saving the scene files would change the path of the hair files, which in turn would break rendering. In the end, we found that the google drive path was slightly different for mac and Windows machines, so look out for that!

Which RenderMan features made a difference in achieving your look-dev goals for Canvas?

RenderMan’s Subsurface Scattering made such a big impact in achieving the look I was after. Black skin and hair hasn’t been done THAT often in CG animated films, but the level of intuitive control with RenderMan’s built in shaders allowed us to get to a look I was happy with. It also allowed us to iterate with efficiency, and that’s a very important point as time was definitely slim.

As an animator, I’ve always been really impressed with how fast and intuitive RenderMan for Maya is, especially as it pertains to motion blur. I’d say rendering efficiency was my favorite part of RenderMan, as it helped us complete the film.

Did you use cloud rendering?

Yes, we used both Fox Render Farm and Google Zync to handle our rendering.

What excites you the most about the future of animation and rendering?

The thing that excites me the most about the future of CG animation is rendering speed. Art is all about iteration, so being able to experiment while seeing results quickly is a huge part of feeling creative. We all wish we had more time to explore and rendering seems to be going in this direction ... we can now see results faster than ever.

Real time rendering is pretty exciting to me as well. Rendering time over the course of the whole short was a considerable chunk of our resources, so decreasing that at some capacity would save so much time and money. 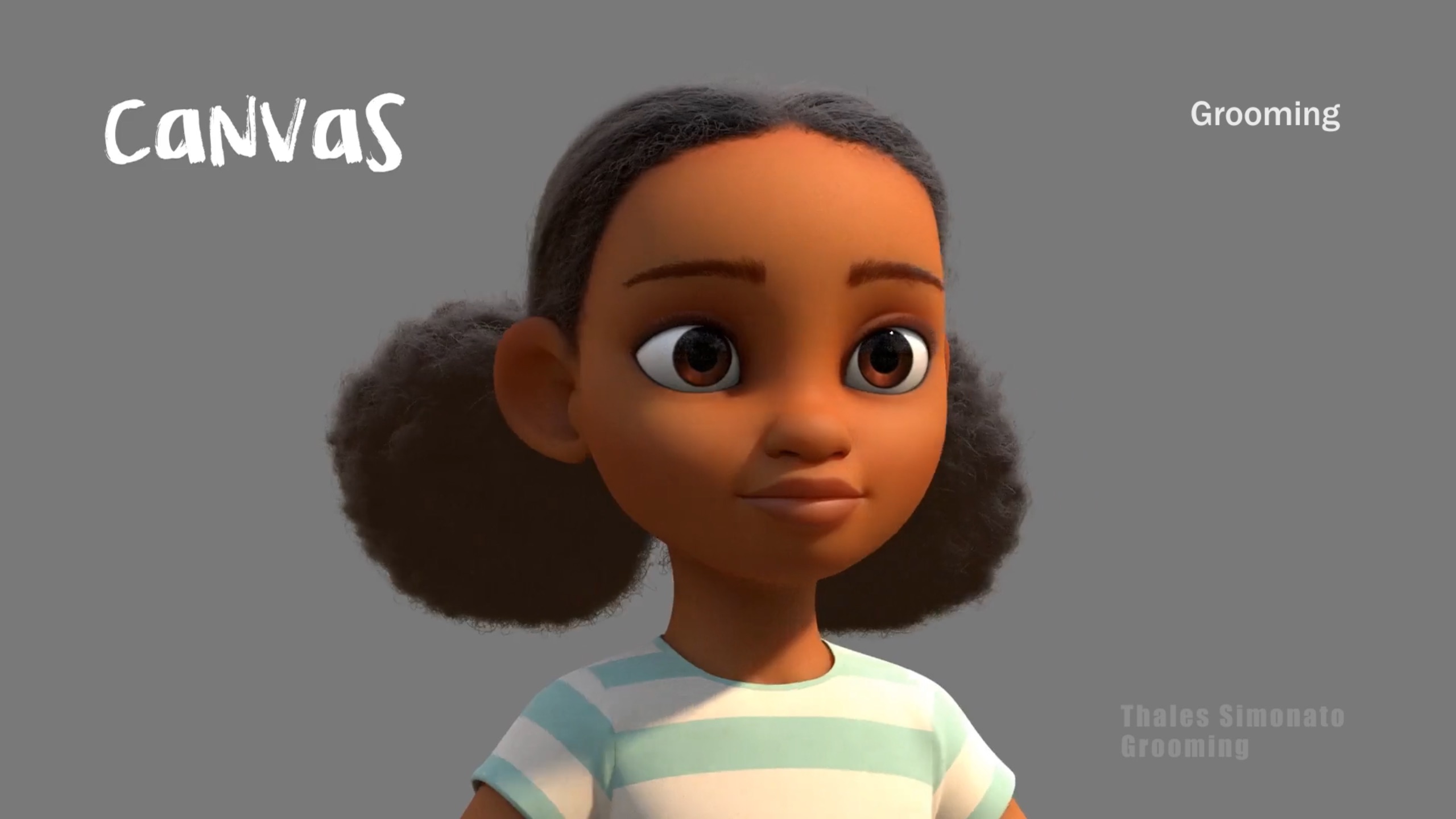 Diversity and representation is a goal our industry is still working to address. What role do films such as Canvas play in breaking down these racial and cultural barriers?

I think Canvas plays an important role in breaking down racial and cultural barriers in the industry both in the film itself, and the creators behind it.

Canvas shows that we can tell stories that people can connect with, regardless of race. My characters happen to be black, but their journey and experiences are universal. And the specificity and care we put on the characters is something I think can be adopted throughout our industry. I feel like black characters don’t often get the same level of care, or research as our counterparts.

From a creator perspective, it shows that there are black creators in the industry who can create projects with a level of production quality comparable to commercial short films with significantly higher resources.

“We can tell stories that people can connect with, regardless of race.”

What’s next for you and your talented team?

Our team is still out there being amazing at what they do. Many were concurrently working on fantastic projects out in the CG industry. My producer Paige Johnstone is moving up out there and still trying to help get important stories out into the world. As for myself, I’m in the process of directing a feature film at Netflix, which is another film that speaks to the much needed representation in Animation.

We’re all still trying to make our marks and make a difference ... one project at a time.

Tutorials | Improve your storytelling with a new shot-lighting tutorial!