PUPs, Pixels, and Possibilities: A Summer Internship at Pixar

In 2017 nine interns joined the Pixar Undergraduate Program. These “PUPs” spent three months learning from some of the top professionals in the industry. Throughout their ten weeks on campus, they explored each stage of Pixar’s pipeline: modeling, shading, lighting, layout, set-dressing, rigging, effects, and global technology. With each new area of study, they received instruction from Pixar Technical Directors who specialized in those areas. The internship culminated in a week-long group project followed by a two-week personal project for each PUP. Renderman was used heavily in many aspects of the PUPs projects throughout the summer, including their final short film and several of the final projects.

For their eighth week, the PUPs were tasked with creating a short film by utilizing the Pixar pipeline that they had learnt up to that point. To bring the project from ideation to completion, the PUPs focused on creating beautiful shots that followed a simple story in order to evoke emotion. With only one week to go from story concept to final renders, speed and the ability to quickly troubleshoot were vital Renderman features. The process began with the PUPs brainstorming concepts for the story. These concepts were developed and refined into three ideas that were pitched to the internship supervisors, who then selected one story to move forward with. Once the story was decided and flushed out, the focus turned to realizing the idea in the time available. The PUPs created a spreadsheet that tracked every aspect of the pipeline as they needed to collaborate and trade off tasks. Concept art and pre-visualization of the set had to be finished as soon as possible so that layout could begin setting up cameras. 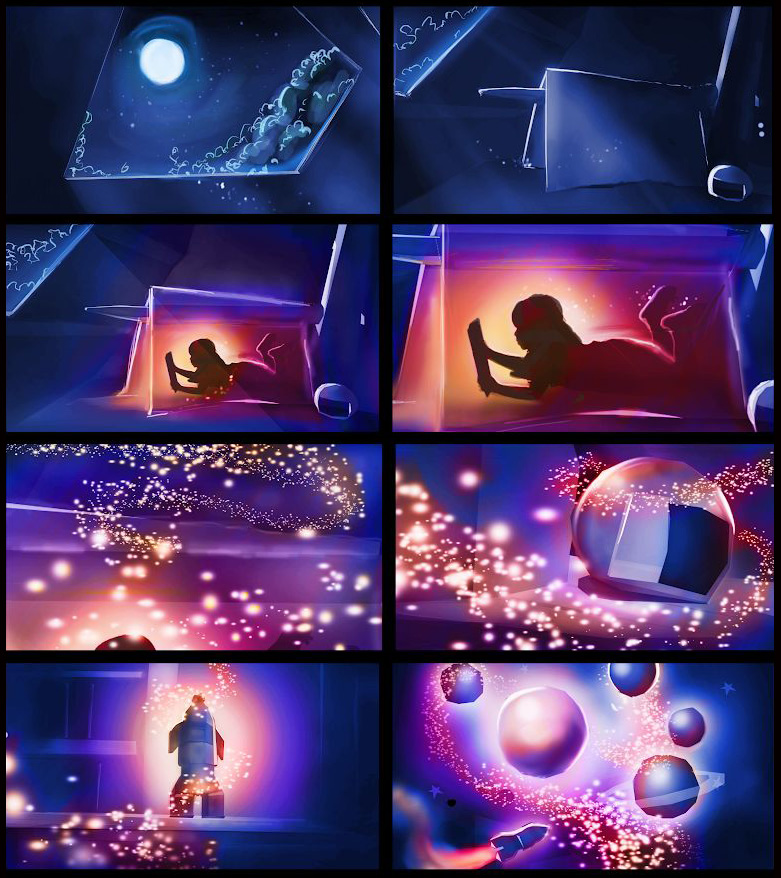 The Pixar Undergraduate Program is an internship that pushes its interns out of their comfort zones into studying all aspects of the technical side of animation. The internship is nothing if not life changing. When asking the 2017 interns about their experience they had so much to say about their internship at one of the best animation companies in the world. “It’s surreal,” said Tabatha Hickman. “I remember walking through the gates, even on the tenth week, realizing how crazy it was that I was working at Pixar and feeling so grateful to have the chance to learn from these amazing people in our industry,” she remembers.

As far as internships go, PUP is special in that it encourages its interns to explore new areas of animation outside of their area of study. It is not uncommon for interns to go into the program with one area of interest and leave with a new one or several! “The memories I left the studio with are ones I will remember forever,” said Cody King. “As we went through each aspect of the pipeline, I also found a new love and appreciation for Lighting. As I left the studio, I discovered that my experience had left me with a passion and drive I didn’t have before,” he concluded.

PUP has a way of inspiring its interns to work harder than they ever imagined. This is partly due to the fact that Pixar’s campus is packed with people who are passionate about what they do and it is contagious! “You are showing your work to the heads of a studio you hope to work for someday. It’s a pretty scary concept, but it actually did wonders for us. We learned to pace ourselves and work as efficiently as possible. We also learned to understand software quickly and focus on the principles of design in each area of the pipeline. We couldn’t have had such growth in any other situation,” said Austin Rodriguez.

It isn’t all work though. As one might expect from a studio that specializes in creating animated movies, the Pixar campus has plenty of ways to have fun. In such a demanding field, time away from the desk is just as important as time spent working.

“I learned that while working hard is important, taking time to relax can lead to a better result, and time management is important for better efficiency.“ 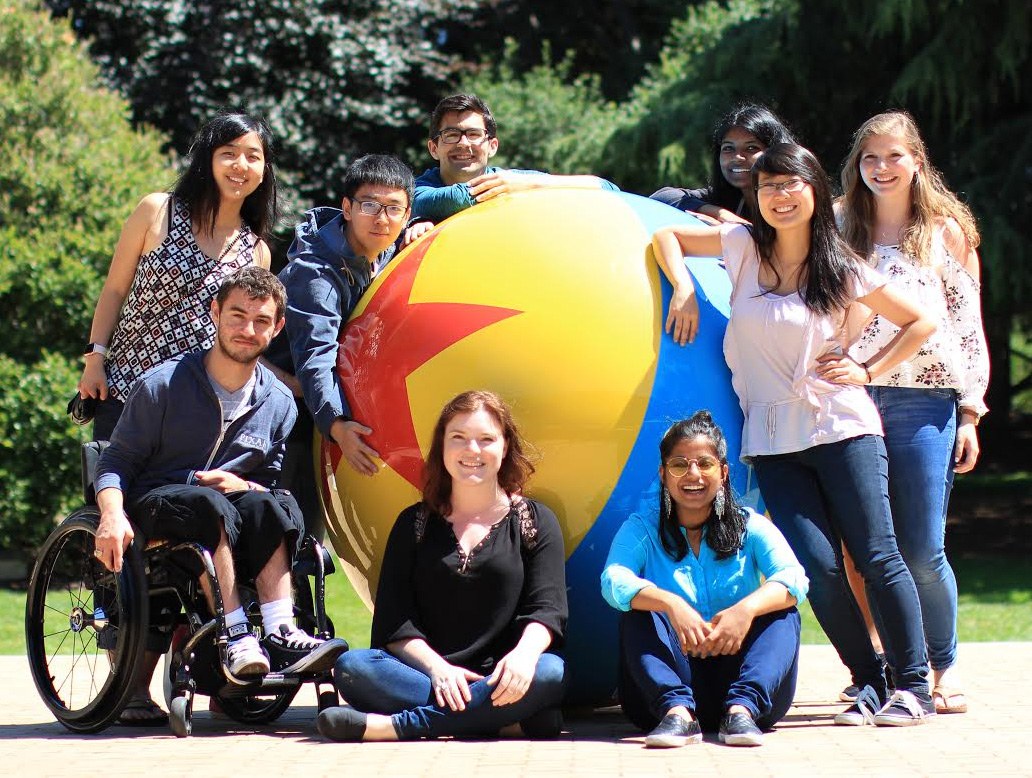 Applications for the PUP internship open each year in December. Check out the Pixar internships site for more info!

Pixar’s campus is filled with things to do. There is everything from ping-pong and lunchtime soccer games, to open art classes throughout the day in sculpting and life drawing and movie screenings. Not to mention ice cream sundaes every Friday at the Luxo Cafe and the famous Pixar Cereal Bar. As technical interns, the PUPs attended presentations by RenderMan and lectures from Pixar veterans like Ed Catmull, Danielle Fienberg, and Mark Andrews. They were also invited to sit in on lighting and layout walkthroughs of the films in production. “It was inspiring to see Coco lighting walkthroughs and to meet Danielle Feinberg!” said Ellen Jiang.

“It took me one hour on my first day to realize that I found another family.“

“Not only would we be together during work hours, but we would hang out and explore the city during the weekends. It really felt like I was part of a family and everyone was so warm and welcoming. If I could do PUP again, I would go back in a heartbeat,” said Vidya Vinnakota. As far as internships go, the internships at Pixar are ones that launch careers and change lives. “The studio welcomes each intern with open arms and complete trust. It is a truly amazing experience. Every person at Pixar wants to see you succeed and will gladly take the time to teach you something new and help you learn. Pixar really does live and die by its people and has taught us the importance of being someone people want to work with. Between the relationships we have built there and the skills we learned the experience is definitely something we will take with us the rest of our lives, and we are truly grateful for it,” said Taylor Schulze.

“This industry isn’t made of people who only look out for themselves. It’s made of selflessness, love, and a sincere desire to help others improve.“

Anushka Deedwania is a Visual Effects senior at Savannah College of Art and Design. She specializes in lighting and surfacing and aspires to be a look development artist in the industry.

Austin Rodriguez is a Senior at Brigham Young University studying a BFA in Animation, specializing in Layout and Previz. He is currently producing BYU’s senior film, Grendel.

Cody King is a senior at Texas A&M University majoring in Visualization.

Hiro Ren is a senior at Savannah College of Art and Design who specializes in Character Effects and also enjoys lighting on the side.

Sabrina Ooi is a junior at Brigham Young University studying a BFA in animation. She specializes in lighting but also enjoys learning other skills in the pipeline.

Tabatha Hickman is a Junior at the University of Pennsylvania studying Computer Science in the Digital Media Design program.

Taylor Schulze is a Junior currently studying computer animation at the University of Colorado Denver. Her main areas of interest are modeling and lighting.

Vidya Vinnakota was an art student at Carnegie Mellon University and is now a Modeling Trainee at Walt Disney Animation Studios.