Ron’s Gone Wrong is the first animated feature film from DNEG, the award-winning visual effects studio which has specialized in creating groundbreaking VFX for the last 20 years. Leveraging their experience on films like Tenet, First Man, Blade Runner 2049, and Inception, DNEG has now collaborated with London’s Locksmith Animation to take on a brand new challenge with Ron’s Gone Wrong.

Do you see that out there? It's a pipeline change!

Coming from a shot-based VFX pipeline, DNEG had to not only reevaluate rendering, but their entire production pipeline, embracing new tools such as Foundry’s Katana and Pixar’s RenderMan. “Originally we tried to shoehorn a lot of our VFX pipeline, but it didn’t always work,” said Derek Haase, Rendering Supervisor at DNEG. “One example was our data interchange format, which works really well for VFX, but it didn’t really lend itself to the scale required by a feature animation project...so about a third of the way during production, we made a significant push towards adopting Pixar’s USD,” added Derek. “For lighting we need to be looking at entire sequences, not only shots, so adopting USD was a great way to make changes flow in a frictionless way down the pipe. The out-of-the-box tools are also a big benefit, for example, we’re taking advantage of previewing looks in USD via USDview instead of opening up a DCC,” said Matt Waters, CG Supervisor at DNEG. “Thanks to USD, the pipeline has become much more circular, instead of traditionally linear between departments, which means that all departments can collaborate simultaneously throughout the entirety of the show. This is super exciting and a huge win,” added Derek. Today, adopting USD is one of the major technology goals for all of DNEG.

A great sense of discovery accompanied the new workflows for feature animation and was a crucial part of solidifying the relationship between DNEG and Locksmith Animation. “A significant part of the crew for this new feature animation division was new to DNEG and coming from diverse production backgrounds. Naturally, everyone brought in new ideas and consensus was many times reached through trial and error. Thankfully the experienced leadership at both companies were very supportive of this process,” said Derek Haase. 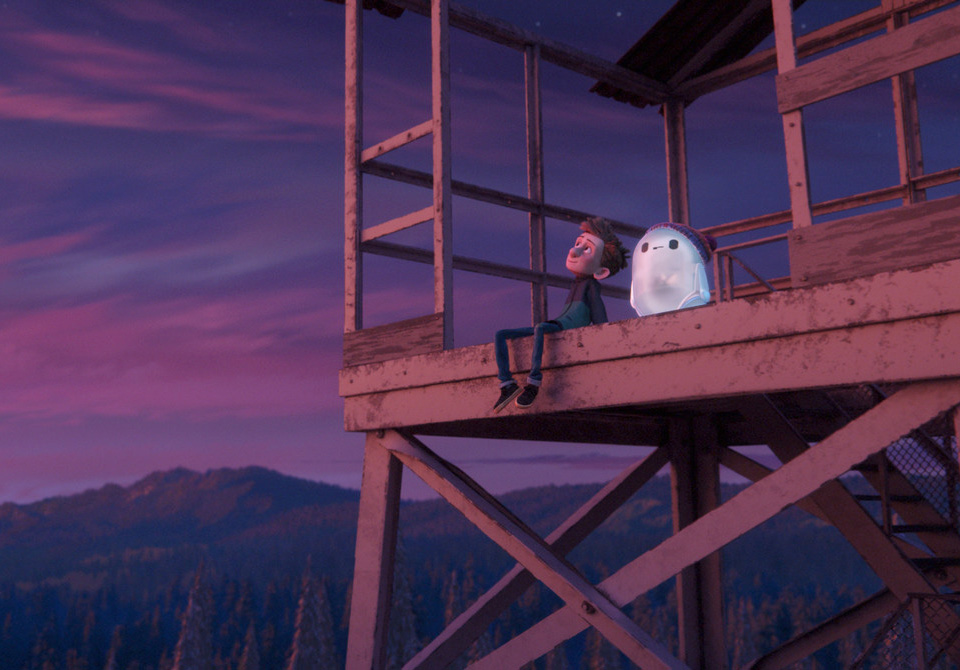 Even though DNEG is largely a Linux studio, collaborating with Windows-based motion graphics departments was essential for the look of the film and especially the animation performance of the robots. “The look-dev process for Ron and the robots was long. Thankfully we were able to create a reliable texture workflow with RenderMan geo lights and USD variants to project the dynamic mograph onto the robot’s displays,” said Matt. Thanks to cross departmental collaborations they were also able to build complex and custom materials for very specific pipeline needs. “We tended to ask Derek’s team for help when we hit some ‘oh, no!’ moments, but the shading pipeline they built was awesome,” said Matt. This was crucial on Ron’s Gone Wrong, because motion graphics were directly linked to the robot’s performance. “We had a very unique rigging system for exporting animation performances from Maya out to our texturing pipeline. This system was a great way to not only make sure the animation performances were perfectly represented in the final renderings, but the motion graphics glitch effects and iconography as well. This was crucial for effectively communicating Ron’s emotional state,” said Matt.

Get started with RenderMan faster than ever with this new official training.

RenderMan ships with production materials, such as Pixar Surface and ILM’s Lama, which include extensive APIs for customization. The ability to extend both Katana and RenderMan was essential for DNEG. “I come from a shader writing background, so having control over the source code allows us to solve complex problems,” said Derek Haase. “We built a custom material editing system in Katana which would talk to the rest of our shading system in one easy UI,” added Derek. DNEG also built a custom shot viewer in Katana to get a high level sense of shots within a sequence with the ability to propagate extensive changes to assets through one simple user experience. “The work that Derek’s team did for customizing our shot and sequence building experience was fundamental to managing large hierarchies of shots...in the end it was very similar to managing a scenegraph. This was fundamental to finishing the show,” said Matt Waters, CG Supervisor at DNEG.

Screens played a crucial role in the aesthetic of the Robots.

This deep level of customization was fundamental to tackling the ambitions of a show of this scale. “Katana lends itself to managing the sheer amount of data required to deliver such a show and thanks to the amazing help of my teammates, Ievgen Kulieshov and Soren Ragsdale, we were able to customize Katana and RenderMan with great performance benefits,” said Derek. “All these factors, combined with RenderMan’s great support and the history behind it, ended up being determining factors for switching DNEG’s entire VFX and Feature Animation pipeline to RenderMan,” concluded Derek Haase, Rendering Supervisor at DNEG.

“RenderMan’s great support and the history behind it, ended up being determining factors for switching DNEG’s entire VFX and Feature Animation pipeline"

DNEG also uses RenderMan’s Tractor for managing the render jobs in all its productions. “We adopted some lighting processes from DNEG VFX, where we divided the rendering process into distinct stages which then determined resolution, sampling quality, priorities, and other factors that made render management a success for the show,” said Matt. “One of the things we would have done differently on this show was take more advantage of the checkpointing system, especially if we can combine it with denoising,” added Derek. RenderMan’s checkpointing allows artists to ask RenderMan to save an image at an arbitrary iteration or time frame, to then continue at a later date to a specified sample goal if needed. This is very helpful for approving shots since seeing through sampling noise in the first iterations is reasonable enough to approve creative decisions, yet much cheaper to render than waiting for full convergence. “A funny story was that we started the show on RenderMan version 22, but we found great speed increases with version 23, so we decided to update the entire pipeline around ⅓ into production. It was very stressful, but a worthwhile push,” said Derek.

Derek’s team also made some output customizations for the compositing teams. “We wrote some custom C++ RenderMan shaders to output arbitrary data for compositing. This allowed artists to request patterns or maps at any point in a material graph,” said Derek. “These customizations have been great and we’ve been testing some others in imager shaders for future stylization, which is really exciting,” he added. “We were very AOV-heavy on Ron’s Gone Wrong,” said Matt. “We were also really taking advantage of light groups. In some shots we were hitting over 30 light groups,” he added. This gave the compositing teams maximum flexibility when grading or adding effects in post.

“Our technology teams were absolute heroes...they hit it out of the park"

The future looks super exciting at DNEG with the adoption of RenderMan. “From a studio technology perspective, we’re super excited to be able to work with a singular solution where we can share a set of tools,” said Derek. “USD provides similar potential as a unifying solution, for example, we can build a new hair system for USD which can then be propagated easily to different tools, whichever those might be in the future,” he added.

DNEG improved their collaboration thanks to Pixar's USD

Standardization and collaboration are also important thanks to open source production tools such as USD, OSL, MaterialX, EXR, openVDB, and many others. “We need to write C++ occasionally, but it’s great to be able to talk directly to a renderer via OSL without having to compile code. This has been a game changer since my time at Imageworks, where I worked alongside Larry Gritz [OSL’s lead developer],” said Derek. “It’s really exciting to see the amount of collaboration from the world’s most important companies in the open source space. We’re building a very comprehensive foundation that gets larger and larger every year, which means we can actually iterate and improve existing tech, instead of having to reinvent the wheel on every show,” he added. 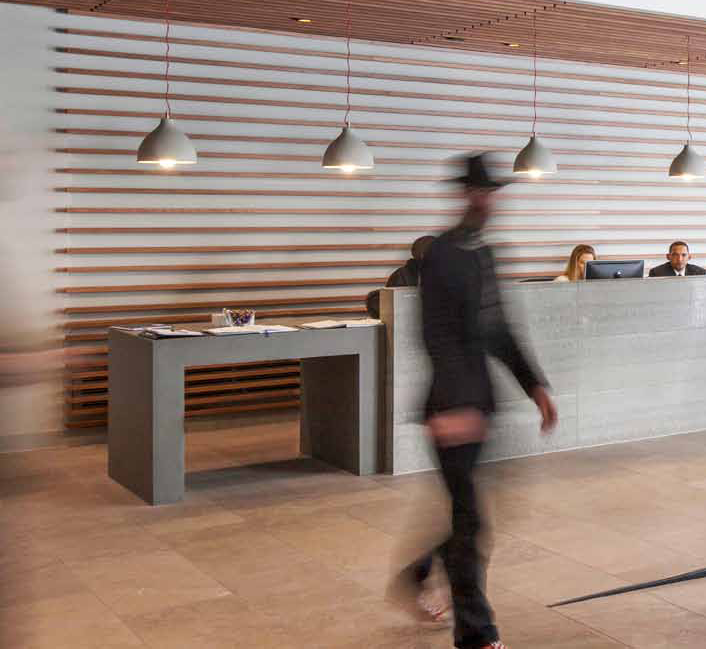 Ron’s Gone Wrong was a first for DNEG, including the stresses of delivering their first animated feature film during a pandemic. “Our technology teams were absolute heroes...they hit it out of the park,” said Matt. “I left the office and had a completely seamless experience working from home, which was a massive accomplishment. We didn’t even know if we were going to be able to complete this show at the start of the pandemic, but looking back, we were able to reinvent a lot of traditional processes, including client reviews, collaborations, ramping up new team members, etc...the question we ask ourselves now is ...could we have finished Ron’s Gone Wrong without working from home?”, joked Matt.

The future holds many exciting projects at DNEG, including pushing the boundaries of the aesthetics in animation. “I’m also super excited about the future of stylization and solving these creative challenges with the RenderMan team and extending the new toolset for Stylized Looks in creative ways for DNEG,” said Derek. “In my time in this industry I’ve witnessed first hand the amazing artists in Europe for CG and traditional animation and it’s amazing to see that DNEG now houses so much of this amazing talent for feature animation and VFX,” added Matt. “It makes me very happy to see the excitement for new creative opportunities and I can’t wait to see what the amazing artists at DNEG create in the coming years,” concluded Matt and Derek.