Stories | The Magic of Onward

The Magic of Onward

Pixar’s latest feature film, Onward, summoned elves, wizards, and trolls bringing magic to the silver screen, literally. During the journey of making this film, Pixar was faced with many different challenges, yet nothing was insurmountable as Pixar conjured the latest features in RenderMan, providing production bewitching new abilities for fast and efficient creation. “There wasn’t a single huge key problem to tackle, like Coco’s 8 million lights, for example...this film just had lots and lots of stuff,” said Tim Best, Onward’s Technical Lighting Supervisor.

A tableau of the first frame in each shot...there’s lots to render in a Pixar movie!

Onward was Pixar’s first show to use version 22 of RenderMan and its new RILEY architecture, allowing artists at different stages of the pipeline to take advantage of major advancements in interactive rendering. “R22 live rendering was faster, more stable, and supported workflows that had previously required starting a new live render, like changing light linking. The improvements to RenderMan were beneficial in many different areas across the show.” said Tim.

Onward has a unique aesthetic which includes strong silhouettes and a saturated color palette. “We used a physically-based lighting model, but often cheated the physics in service of a more stylized or painterly look.” said Tim. This was in part possible thanks to RenderMan’s Analytical Lights and Light Filters, which provides lighting artists versatile tools to closely match the creative vision from Onward’s Director of Photography, Sharon Calahan. ”We were lucky to have her. She brings a unique set of skills which are highlighted by her accomplishments as both a lighter and landscape artist. She has been integral to the look of many Pixar films all the way to the first Toy Story,“ said Jonathan Pytko, Lighting Supervisor at Pixar.

Onward’s aesthetic balances the magic and the mundane. This led to an interesting mix of silhouettes and color palettes which provided many opportunities for humor and drama. For instance, mixing the profile of a centaur in the context of a kitchen in suburbia, or super-sizing a bright orange cheesy puff to navigate dark cavernous waterways. “Our Director, Dan Scanlon, wanted comedic shots to read clearly. With Katana and RenderMan, we had a deep and flexible lighting toolset. This included many tools that are analogous to those that a gaffer and cinematographer might use on a live-action movie set, but also other options that leverage the fact that we’re working in animation, and can cheat things in ways that aren't possible in live-action. Working with all of these tools, the lighting artists were able to create a variety of grounded, believable, stylized, painterly lighting looks, often matching paintovers, and to realize Sharon’s and Dan’s specific vision for the film.” said Tim Best. 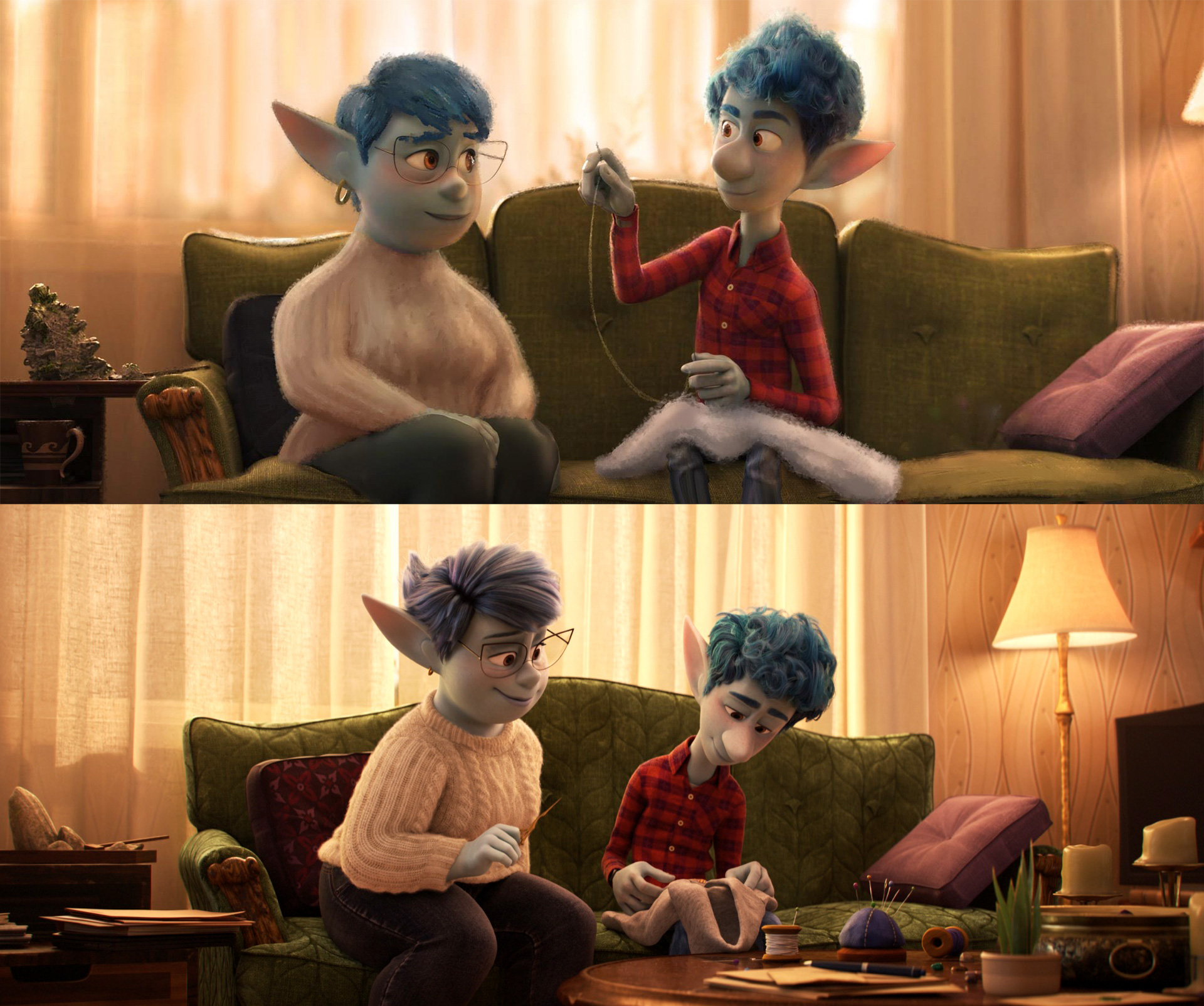 Collaboration among departments played a crucial role for Onward. “We used a lighting tool developed for Cars 3 and Coco called ‘bakelite’ to generate, and help manage, large numbers of practical lights for Onward's vehicles and sets. Our updates allowed us to easily change things like the distribution of headlight colors on crowds of car lights. This gave us extra creative flexibility with shots, even very late in the approval process, since we wouldn’t need to request any changes to assets, or even to de-instance crowd models, allowing those departments to focus on other challenges.” said Tim Best, Technical Lighting Supervisor at Pixar.

Another technical challenge were volumes and particle simulations, critical elements for creating the aesthetic for spellcasting in the suburban world of Onward. “To help determine what magic might look like, we worked closely with the Story department to understand the Magic’s role, which led us to develop the magic more as a character than an effect, which was a first at the studio,” said Vincent Serritella, Effects Supervisor at Pixar.

The magic spells were a character in their own right

“Once we had a handle on dimensionality, we explored the look and characteristics of the spell through further concept studies, always keeping an eye on not going in a Sci-fi direction,” added Vincent.

Which version is your favorite?

Thanks to new developments in RenderMan, lighting artists were able to use volumes as direct light sources, which helped integrate fantastical magic spells into rooms and scenes with physically based lighting “We took a modular approach to lighting effects-heavy scenes thanks to new volume mesh lights, and mesh light arrays, which is a clean representation of a multitude of lights in Katana. This allowed us to take fire effects and other whimsical volume effects and move them around on a per-shot basis,” explained Tim.

“On a quest, the clear path is never the right one.”

Spellcasting is an essential ingredient for Onward, and in fact, it directly reflects the transformation of our hero, Ian Lightfoot. “Every Spell had a mix of looks, both graphical and stylized. They felt a bit disconnected in the world when only one component was heading down either path. Mixing these aesthetics with other realistic effects was a key to dialing them in at every story point,” said Vincent.

Being able to use the Houdini-generated volumes as direct light sources not only made the magical effects look great, but it made them fast and efficient too, giving shots a more physically plausible look without having to manually place lights or rely on expensive indirect illumination. “This had the added benefit of speeding up renders, because we no longer have to generate a heavy secondary mesh for lighting...of course, lighting artists still art direct by adding lights and filters to hit certain notes and effects, but starting with a physical lighting base allows us to feel more confident about breaking the rules later,” said Tim.

One of the most important groups at Pixar is the Lightspeed team who oversee each show to ensure it renders as efficiently as possible. They also have to create solutions to deal with a show’s most challenging technical issues. “Our main focus is to make sure the lighting and rendering pipeline is running lean and clean, in order to make sure lighters have the most efficient assets so they can be productive,” said Renee Tam, Lightspeed Lead at Pixar.

The Lightspeed department in action!

“On top of that, we also help upstream departments anywhere we can, memory, R&D, shading, debugging toolsets, troubleshooting artifacts, tracking bugs with core dumps, or general issues that cause our pipeline to break,” added Renee.

In fact, without the technical wizardry of Pixar’s Lightspeed team, there would be no movie magic at all. “So, here’s how a show works...you start with layout, then sets, then we have these camera lights / white lights to check if the set is misbehaving, then we have rough lighting, master lighting, and shot lighting,” said Renee. “When the sets department is closer to their deliverables, we start examining the work. Sometimes sets, anim, or fx will reach out if they need any technical help or requests...but most of the time we spend our efforts right after master lighting is being finalized, where we get to optimize. That helps us work with multiple departments as a team, lowering stress for everyone at all stages of the creative process,” Renee continued.

Onward’s many challenges, particularly the spellbinding ones, were overcome because people worked together. Thanks to this focus on collaboration and artist feedback, RenderMan has helped bridge the gap between departments, while giving artists immediate feedback for their work.

Learn about the latest developments for RenderMan XPU.

With the latest release of RenderMan, the tools for production have become even more powerful to meet the needs of the biggest animation and VFX studios in the world, such as support for light baking and ever improving interactivity and the road ahead will bring more innovative features to RenderMan in order to achieve the creative goals of the amazing artists at Pixar.